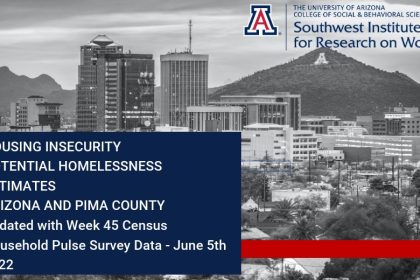 The University of Arizona Southwest Institute for Research on Women has released its thirty-third update to its report on Housing Insecurity Indicators and Potential Homelessness Estimates for Arizona and Pima County. This report measures current housing insecurity with newer census data.

Some updates of note demonstrating positive trends of increased housing security include:

-The macroeconomic situation has continued to improve steadily at both the national and state levels.

-Of those non-current renters the proportion who reported that they were “very likely” to experience an eviction in the next two months remained very low, 6.1%, while the proportion seeing eviction as “not likely at all” more than doubled.

-Among these non-current renters, the vast majority, 70%, are only 1 or 2 months behind on their rent (down from 80% in the previous survey wave).

-This survey also contains the largest proportion of non-current renters who reported having applied for and received rental assistance, and the lowest proportion reporting that they have not applied for assistance in this survey to date. This suggests that non-current renters in Arizona have been more active in pursuing and more successful in receiving rental assistance in recent weeks.

Some indicators of concern include:

-Individuals (nationwide) who have reported either a lot of difficulty or no ability to walk, see, hear, or concentrate also are very disproportionately likely to report being behind on rent payments.

-It appears that members of historically marginalized groups (especially people living with disabilities) are not benefiting from the improving economy as quickly on average as other demographic groups.

-The number of eviction filings in Pima County hit a pandemic-era peak in January with 1077 filings, followed by 828 filings in February, 944 filings in March, and 853 in April.