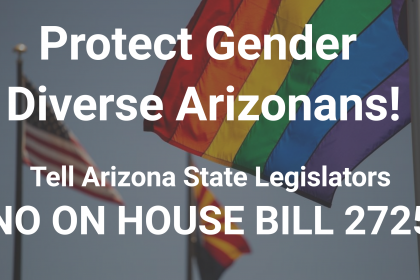 TPCH opposes Arizona House Bill 2725. This one-sentence bill seeks to preemptively erase the legal recognition of non-binary and other gender diverse Arizonans identities. HB 2725 would require state identification documents to contain only a male or female gender marker. The bill pre-emptively bans nonbinary people, who are neither exclusively male nor female, from using gender-neutral X markers on their IDs, even though this is not currently permitted under Arizona law.

“HB 2725 is needless and unjust,” said TPCH Board Chairperson, Daniela Figueroa. “It is devastating that the State legislature is spending time during the COVID-19 pandemic to legislate hate.”

Take action today by contacting legislators and urging them to oppose HB 2725.

How will HB 2725 hurt Arizona? What does this have to do with homelessness?

Bills like the HB 2725 further stigmatize and de-humanize gender diverse Arizonans including youth who are disproportionately impacted by homelessness. Although there is limited research regarding the prevalence of homelessness among gender non-binary persons, local and national research consistently indicates heightened risk among LGBTQ+ communities. The 2015 United States Transgender Survey found that one in three transgender Americans experience homelessness at some point during their lifetimes and the National Survey on LGBTQ Youth Mental Health found that LGBTQ+ youth are suffering.